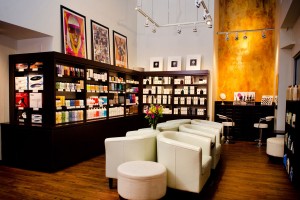 The “Salons of the Year” competition focuses on new and newly remodeled salons. The magazine’s panel of editors and art directors evaluate all the entries and narrow the field down to 20 salons.

The judges then view seven to 10 photos of each remaining entry and score them in six décor categories: (1) use of color, (2) lighting, (3) flooring, (4) efficient use of space, (5) consistency of design, and (6) overall aesthetics. The salon with the highest score is the grand-prize winner and will be featured on Salon Today’s June cover. The next highest score is first runner-up. The second, third and fourth runners-up follow the same progression. The remaining salons are designated “Salons of Distinction.”

“Judging was lots of fun as well and it was an honor to be asked participate,” said Joelle Ray. “The process was more difficult than we thought it would be because there were many unique, interesting, and innovative designs to choose from.”

All of the winning salons will be published in the June edition. Based in Lincolnshire, Illinois, and published by Vance Publishing, Salon Today is a leading business magazine for fine salon and spa owners. Its sister publications include Modern Salon, Process, and Renew magazines.

March 26, 2008 (RALEIGH, NC) – Embracing their role as the official salons for the STRUT ’08, a haute couture and entertainment event coming to Raleigh May 3, Samuel Cole Salon recently created hair and make-up designs for a group of models for a photography spread on the show that will appear in Social The Magazine in April.

On March 16, the 12 of the show’s 35 models gathered at Samuel Cole Salon in North Raleigh, where eight stylists set about creating “glamorous, night-on-the-town” hair and make-up to complement a collection of upscale-boutique fashions, according to Joelle Ray who co-owns the two salons with her husband, master stylist Jack Ray. The fashions were provided by bebe, NV Clothes for Men, Verses Jeans and UniquitiesMix.

“The look for the shoot was ‘trendy club scene,’ Ray said. “It was a fun day, and I’m always impressed by how well our team of stylists work together.”

Photographer Terrance Jones created some of the images for the two-page spread at Samuel Cole Salon. Then the models traveled to Mura, a restaurant in North Hills and a STRUT sponsor, for more shots. The salons’ stylists were on hand for any necessary touch-ups on location.

STRUT ’08 will be held at North Hills on May 3 to benefit Interact, a Wake County organization that serves victims of domestic violence and abuse. The show will feature six national fashion designers with Raleigh “roots,” as well as local designers and boutiques, music and dance performances. The designers include Miranda Laughlin, Elizabeth Yarborough, Holly Aiken, Guy Marshall and Amy Stephenson. The event will also feature fabrics and textiles by Chuck Stewart of “Tumbling Colors.”

February 20, 2008 (RALEIGH, NC) – Jack and Joelle Ray, the husband-and-wife team behind Samuel Cole Salon in North Raleigh, will help select the runway models for STRUT, a televised fashion show to be held in North Hills on May 3, 2008. The Rays’ salon was selected as “Official Salon” for the show, which means their stylists will create all of the hair and make up designs for the event.

Auditions for models will be held at The Mint on Fayetteville Street in downtown Raleigh on March 4. STRUT organizers Brian Williams and Betzi Hekman say they will need over 30 men and women to model clothing and accessories by top designers with Raleigh “roots,” including Miranda Laughlin, Amy Stephenson, Guy Marshall, Elizabeth Yarborough and Holly Aiken. Several Raleigh-area boutiques will also participate in the show.

The Rays will be on hand at the auditions to make sure the models selected also offer opportunities for high-end hair designs.

February 1, 2008 (RALEIGH, NC) – Samuel Cole Salon, an award-winning hair salon in North Raleigh, will serve as the Official Salon for STRUT, a gala fashion show to be held in downtown Raleigh on Saturday, May 3, 2008, beginning at 9 p.m.

According to producer Brian Williams of Brian Williams Television, STRUT will spotlight new collections by top designers with Raleigh roots, including Miranda Laughlin (dresses), Amy Stephenson (jeans), Guy Marshall (boots), Elizabeth Yarborough (jewelry) and Holly Aiken (bags), plus fashions from several local designers and boutiques. And when the models strut down the catwalk in the designers’ couture, they’ll also be wearing hair and make up created by the stylists of Samuel Cole Salon (www.samuelcole.com).

“The behind the scenes action of a fashion show has more electricity than any other type of live production,” said Jack Ray, senior stylist and co-owner of the North Raleigh salon with his wife, Joelle. “All the creative energy and effort coming together to create a vision that will walk down the runway – it’s quite a rush. We are excited to be chosen for this amazing opportunity.”

Besides the cameras capturing the show itself, which will be televised on CW22 (Channel 2), more cameras will capture the excitement and frenzy backstage as the stylists prepare each model for his or her turn on the catwalk.

“Our stylists from both salons are very excited,” Ray said. “This is a fantastic opportunity for our team to showcase their talents and really be involved with fashion in the full context of hair, clothing and makeup.”

STRUT will feature live musical and dance performances along with the fashion show, Williams said. The specific venue will be announced soon, along with advanced ticket information. Social The Magazine is a partner in the venture. 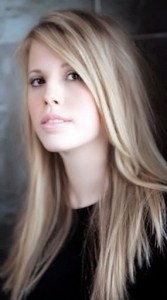 Are you adventurous? Willing to try something new? We’re looking for male and female hair models to assist our stylists with their on-going, state-of-the-art education. Each week we work on new and exciting trends in cuts and colors, and we need men and women who will welcome what could be a completely new look – for free! If you have available time on Monday, Tuesday or Thursday mornings and would like to be a Samuel Cole Salon hair model, send us your age, gender, current cut and color and, and contact information and we’ll contact you as the need arises.

3/23/2020 - Wake County has announced effective Monday, March 23rd, 2020 through Thursday, April 30th, 2020, all salons will be closed. To comply with this mandate, we will be reaching out to all clients to reschedule affected appointments tomorrow, Monday, March 23rd, 2020. In this uncertain time, we will all get through this together, … END_OF_DOCUMENT_TOKEN_TO_BE_REPLACED