February 2014 (New York City) – Samuel Cole Salon co-owner, Jack Ray worked backstage at NY Fashion Week for the Milly by Michelle Smith show. Jack was invited to join the Wella Fashion Week Team lead by stylist and industry veteran, Christopher Dove. Christopher along with his business partner, Sonya Dove most recently worked as stylists for the latest Hunger Games movie. The Doves created the fantastical wigs for all of the Capital characters in the movie. Jack also had the opportunity work alongside Shear Genius’ Anthony Morrison.

“It’s incredible to be selected to work with such creative and talented celebrity stylists. It’s a rush to not only be working Fashion Week, but to also be working with the best in our industry,” said Ray. 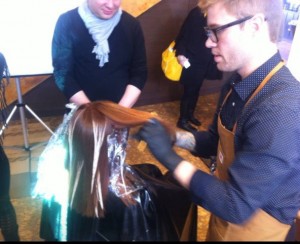 February 17, 2014 (RALEIGH, NC) – Wella Educator, Mark DeBolt was on-hand at Samuel Cole Salon to share his color expertise in a class focusing on color placement and meticulously matching hair color to the hair cut. Mark increased excitement about the upcoming spring/summer color trends by teaching stylists how to achieve phenomenal color results through Balyage (the French word for hair painting). He is a gifted and passionate educator and quickly became a stylist favorite for color inspiration.

As a two time winner for Wella Professional’s International Trend Vision Award, Mark DeBolt aspires to craft and create beauty through the art of professional coloring. Mark is driven naturally through his meticulous technical and artistic abilities. He draws inspiration from diverse areas, including photography, nature, painting, fashion and innovations in haircolor. His passion for hairdressing is met only by his love of enriching the skills of salon professionals at all levels.

“Mark is such a fabulous educator. He is passionate and very well educate and extraordinarily down-to-earth. He is truly inspirational. I am so glad to work at Samuel Cole Salon where I have the privilege to be in the company of some of the most brilliant minds in our industry,” said Jenny Smith, Samuel Cole Salon stylist.

“Mark DeBolt gave us user friendly techniques that will only expand our ability to personalize our color services for our clients. His knowledge is expansive, inspiring and motivational. I have already utilized his techniques with superior results. I can’t wait to work with him again,” said Carolyn Nord, Samuel Cole Salon stylist. 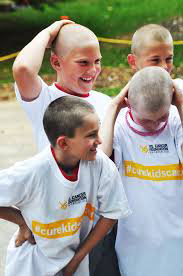 January 2014 (RALEIGH, NC) – Samuel Cole Salon has teamed up with the Vs. Cancer Foundation to help children battling cancer in our community!

Samuel Cole Salon will host the drive through March, asking employees, clients, and our community to contribute these much needed items or donate directly at samuelcole.vs-cancer.org.

“It may seem very simple, but sometimes the simplest gift can lift spirits the most. We are so motivated to get as many donations as possible to help make these children’s treatments just a little easier,” said Joelle Ray, co-owner of Samuel Cole Salon with her husband, Jack. 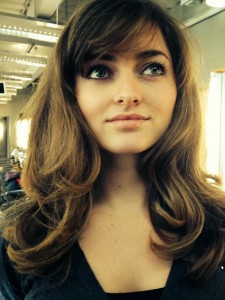 November 18-19, 2013 (NEW YORK CITY) – Samuel Cole Salon recently sent three of their stylists for advanced education at Bumble and bumble University in NYC. Kelsey Wright, Erin Grogan and Veronique Breault attended a two-day workshop that was devoted entirely to styling hair entitled Styling I. They improved their foundational skills and fine-tuned their command of tools and products. They learned to control the flat brush and round brush and the virtue of consistency through replication by styling multiple models in hand-on sessions.

“Attending Bumble and bumble University was a truly amazing experience.  What a phenomenal opportunity to improve my skill set.  I am looking forward to taking what I learned back to my clients at Samuel Cole Salon,” said Veronique.

5/20/2020 - We are so excited that the Governor has allowed us to open in his Phase 2 guidelines! We will be operating at less than 50% capacity starting Friday, May 22, 2020 at 5pm! Please be aware!! We have cancelled ALL missed appointments and previously scheduled future appointments. We will be scheduling all new appointments for all … END_OF_DOCUMENT_TOKEN_TO_BE_REPLACED