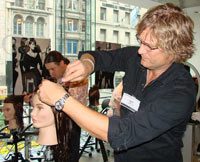 August 25, 2008 (RALEIGH, NC) – After Joelle and Jack Ray, the owners of the award-winning Samuel Cole Salon in North Raleigh, spent time this month at the Redken headquarters in New York City and the Goldwell HQ in Baltimore, Maryland, they knew exactly where the trendiest of hair styling and coloring options is headed.

It’s all about collision.

“It’s about putting concepts together that technically shouldn’t or wouldn’t be together, to create a sense of clashing,” Joelle said. “In coloring, warm tones clash with cool tones. Texturally, sleek hair features textured, pieced ends, or smooth hair is combined with curls.”

The Rays spent three days at Redken’s on Fifth Avenue where they explored the latest offerings in the company’s Trend Collection. They learned new color placement and styling techniques that, combined with new Redken products, create the trendy collision look.

Then they headed to Baltimore where they spent three more days at Goldwell, one of the hair industries premiere sources for research, development and manufacturing of coloring products.

“And again, the emphasis was on collision – of tone, style and texture,” Joelle said.

The Rays make it a practice to visit the leaders in the hair styling industry “to see what’s out there,” Joelle said. “ We want to be able to offer our clients in both of our salons the best possible products and techniques available. So we go to the sources and come back energized.”

Earlier this summer, Jack Ray and a Samuel Cole Salon stylist participated in a two-day International Colors Seminar presented by Wella, one of the leading international beauty suppliers, in New York. 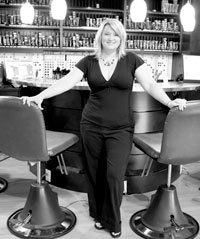 August 18, 2008 (RALEIGH, NC) – Joelle Ray, the driving force behind the award-winning Samuel Cole Salon in North Raleigh, is featured this month in the Raleigh version of Skirt! Magazine.

Ray, the mother of two sons (Sam, 15, and Cole, 12) and a master stylist herself, co-owns the salons with her husband, Jack. She is featured in the magazine’s “24/7” section, which spotlights women who are “well known in the community for some positive reason,” according to Skirt/Raleigh editor Faith Dwight.

“I chose Joelle this month because she’s a business-owner who is not only concerned about the bottom line but with the well-being of her employees. I also love that she works with her husband, and that her family is her first priority. I think she’s a woman who’s got her head on straight and, for that reason, I chose her to be a role model for Skirt! readers: You can be a successful career woman and a woman who puts her family first.”

According to Joelle Ray, she didn’t choose her career. “It chose me! I had four sisters and enjoyed doing their hair. When I went to have my hair done, I always stayed afterwards to ask my stylist questions. So when I was about 19, my hairdresser said, ‘Joelle, why don’t you go to hair school?’ I signed up the next day because I saw a career path that for me had all the right appeal. I could own my own business, which would give me the flexibility for a family, I would be doing something that would help others feel good, and I could become a mentor to young stylists.”

Ray’s love for the mentoring aspect began when she followed her mother to work as a teenager.

“My Mom worked in a nursing home,” she explained. “I often went with her and witnessed the love and joy she brought to her job because she was making people feel better. I realized that I also wanted a career centered on helping people. As a stylist and business owner, I not only help my clients by improving their appearance, I’m often a shoulder to cry on or just someone to listen. And I help young stylists become successful by training and mentoring them. It has been a privilege and immensely gratifying to have so many positive relationships with so many people. Now I’m considering becoming a consultant to help other salon owners improve their businesses.”

As Skirt’s editor pointed out, Joelle Ray somehow manages to keep family and career in balance. How does she do that?

“To create balance, you must be aware of your life’s ‘big picture,’ “ she said. “I keep work and family life balanced by making sure I’m spending my time the way I need to right now. I think about what I can never get back at another time. The answer is always my boys’ growing-up years. I can always make more money, take a vacation, start a new venture, but they will never be children again. That makes my choices simple and easy. I don’t want to miss their childhood years. They need me now, not when they’re adults. And I’m blessed with the best life partner — my husband. We share every aspect of our lives, from cooking, laundry and homework to running our businesses.”

Having spent time with Ray, Dwight also knew that she could fulfill another requirement for the section. “The 24/7 woman should be witty and have a good sense of humor,” she said. Women in the section are asked to answer a list of questions that “are more interesting if the answers are funny.” When Ray was asked to name her favorite body party, she responded with: “It’s on my husband.” What would make the world a better place? “If we ate dessert first.”

Skirt! was launched 1994 as a monthly magazine for women in the Charleston and Columbia areas of South Carolina. Since then, it has expanded to include print editions in nearly 20 other cities, including Raleigh. For more information, visit www.skirt.com.

Samuel Cole Salon is hosting a back to school supply drive now through September 30th! Most Needed Items:Pens.Expo Markers.Pencils.Glue Sticks.Spiral Notebooks.Combination Locks.Dividers.Bookbags.Composition Notebooks.3 Ring Binders.Loose Leaf Paper. Thank you for your help in supporting the students and teachers in our community! … END_OF_DOCUMENT_TOKEN_TO_BE_REPLACED