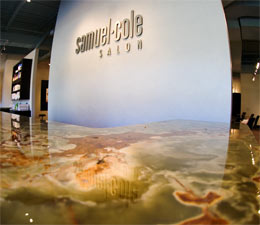 January 28, 2007 (RALEIGH, NC) – Inside Samuel Cole Salon’s modern, curvilinear interior, with its sleek espresso cabinetry, polished Pakistani onyx reception counter, glowing frosted-glass shampoo unit from Germany with white porcelain bowls that look more like sculpture than equipment — it’s easy to forget you’re in the upper north side of Raleigh instead of the upper west side of NYC.

For a year, Samuel Cole Salon’s co-owners Jack and Joelle Ray have been working with interior designers Michael Perry of Porto in North Hills and Clark Hipolito of The Art Company on Glenwood to create an ambience that’s as au courant as the hair styling for which the award-winning salon is known. The results of this collaboration will be unveiled Saturday, February 3, when the “new” and expanded Samuel Cole Salon officially re-opens at 240 Newton Road.

The Rays, a husband-and-wife team who named their salon for their two sons, began “remodeling from the inside out” about three years ago, they said, when they took a hard look at the business side of things and began making some much-needed changes. Those changes caused their client base literally to double, then continue to grow by 50 percent each of the next two years. When the storefront space beside theirs became available a year ago, they knew it was time to enlarge and remodel the physical facility.

The expansion allowed the salon to grow from 1400 square feet to 2800 square feet, which gave Perry and Hipolito ample room to use custom designed cabinetry to create separate and distinctive areas for styling services, retail, and reception. They also managed to strike a balance between “urban chic” and “warm and inviting” by juxtaposing the more sleek, modern aspects of the interior with such elements as a pale blue ceiling and honey-hued bamboo flooring. The bamboo also appealed to the Rays’ and their designers’ desire to be good stewards of the environment. Bamboo can be completely cut down but the roots are never damaged, so the forest grows back quickly for reharvesting. “Cork and bamboo are the ultimate ‘green,’ renewable resources,” Jack Ray said.

The cork floor in the styling section also softens the visual effect, but Michael Perry specified it for two other reasons: Like the bamboo, it’s environmentally responsible. Just as importantly, it’s comfortable for the stylists – a fact few other salons in the nation have discovered. “Cork is harvested from the bark of the cork oak tree, so the tree isn’t damaged or cut down,” Joelle explained. “It’s also water, insect, and fire resistant. And the air trapped inside the cellular structure of cork is a natural shock absorber so our stylists are comfortable standing on their feet for hours on end without us having to resort to those big, black mats.” Another special feature in the new salon is Clark Hipolito’s faux finishing. For example, a large faux copper wall fronts the styling area. The same finish adds a note of elegance to the restrooms.

According to the Rays, the new salon not only gives the staff more room in which to work and will accommodate an ever-growing client base, it’s also “very inspiring, very uplifting,” Joelle said. “It creates energy because it’s a high-impact space. It just feels good to be here.” The Rays believe that feeling will appeal to current and future clients. The re-opening will take place Saturday between 6 and 8 p.m. Sponsors include Porto, Margaux’s, Bluewater Spa, and The Art Company.

The North Raleigh salon also contributed Cory Stillman’s “Favorite Things” basket for auction, which, at the left-winger’s personal request, included a haircut certificate with stylist and co-owner Jack Ray. The salon threw in a tonic shampoo and sumo tech hair paste by Bumble and bumble for Stillman’s basket just for good measure.

“This was a wonderful opportunity to help a worthy cause while working with such a great organization as the Hurricanes_,” Ray said. “And Cory Stillman is one of the true gentlemen of the game that it was an honor to contribute to his Favorite Things basket.”

Samuel Cole is a full-service hair salon that also happens to be a favorite destination for several Hurricane players and their wives. (Justin Williams’ wife, Kelly, was recently spotted in Jack Ray’s chair for a quick clip before the ‘Canes’ right-winger played for the Eastern Conference in the NHL’s 2007 All-Star Game January 24.)

The Hurricane’s Casino Night raised funds for the Kids ‘N Community Foundation, which supports children’s charities and educational programs throughout North Carolina. The night includes a wine tasting and casino tables with Hurricanes players and coaches as the dealers. Besides the silent auction, a live auction offered up exclusive autographed merchandise and many other items for bidding.

The studio is offered through Bumble and bumble University (Bb.U), the New York-based company’s graduate school for hairdressers that provides advanced training in all aspects of hair styling and care.

“It’s a hands-on class for advanced stylists to hone our skills and sharpen our eye for design,” Ray said. Ray and all the stylists at Samuel Cole Salon make it a regular practice to attend studios at Bb.U, he noted. “Everything about New York City and Bumble & bumble’s education is inspiring,” Ray said, “the fashion, the energy, and the vibe. I look forward to bringing back to Raleigh a heightened sense of creativity and passion.”

Samuel Cole is a member of the Bumble & bumble network of salons. To be a member, a salon must pass a rigorous curriculum for professionalism and design expertise. In addition to selling Bumble & bumble hair products, only Bb. network salon stylists may attend Bb. U classes.

Samuel Cole Salon was voted Citysearch’s Best of the Triangle 2006 “Salon of the Year” and 2006 “Top Ten Color Salon”. The salon also received Metro Magazine “Metro Bravo” award for Best Salon in the Triangle in 2006.

Jack and Joelle Ray, who have 30 years combined experience in the hair industry, own the salon, which was named for their sons, Samuel and Cole. Services include hair design, custom color, highlight techniques, thermal reconditioning, and glamour concept looks.

5/20/2020 - We are so excited that the Governor has allowed us to open in his Phase 2 guidelines! We will be operating at less than 50% capacity starting Friday, May 22, 2020 at 5pm! Please be aware!! We have cancelled ALL missed appointments and previously scheduled future appointments. We will be scheduling all new appointments for all … END_OF_DOCUMENT_TOKEN_TO_BE_REPLACED